Kathryn Nuernberger is the author of the poetry collections, RUE, The End of Pink and Rag & Bone. She has also written the essay collections Brief Interviews with the Romantic Past and The Witch of Eye (forthcoming in 2021). Her awards include the James Laughlin Prize from the Academy of American Poets, an NEA fellowship, and “notable” essays in the Best American series. She teaches in the MFA program at University of Minnesota.

If a woman dreams of lace, it is said,

she will be happy in the realization

of her most ambitious desires

and lovers will bow to her edicts.

There were two Annes – the one who dreamed of lace

and the one who dreamed of waxen seals, as there are two

like a needle prick of spilled blood, which is edible wild carrot,

and the one with no dot, stalk spackled in purple like Socrates’

blood, it is said, though he spilled no blood when he was

executed by hemlock, which is non-edible wild carrot

also blooming in an upturned face of white blossoms.

Carrots, it was said, are such an aphrodisiac Caligula amused himself

by feeding the court nothing but, then watched them rut like animals.

When I lived in that lonely place, I bought a field guide to learn the name

of every flower. There were not many to learn, stitched as I was to a field

on the right. Where there might have been poppies and cornflowers

and honey bees needle-pointing the rows, only Queen Anne’s Lace

was hardy enough to make a kingdom out of such long-barren dirt.

My ire at these impossible, 7-dusted acres.

My ire at the billboards with ultrasounds as big

as a cloud floating over the rows of copyrighted

When everything on a tract is alive and buzzing, a fallow field

will bloom one medicine after another. If you look them up

in Culpepper’s guide or Pliny’s, almost all in leaf or seed or stem,

some small dose or a large one, will “provoke the menses,”

as the euphemism goes. When everything is alive, there is never

a week when the soil does not offer you some kind of choice.

Rousseau, who understood so well what we give up

in exchange for the social contract, who wrote the great

treatises on romanticism and democracy from his place

in exile. Rousseau, I thought, my antidote to this minister

who does his abstinence-only counseling for teenage

girls and pep talks the boys on Godly masculinity just

one diner table over. If you knew how many times

I’ve heard, “Our Lord is a jealous lover.”

But he is also Rousseau who dumped his bastard children

in an orphanage. Rousseau who had no care for what

the social contract did to the women he took as lovers

and then left as lovers. Rousseau who goes on and on

who has no idea.  Had Rousseau written his botanical letters

to me, his “dear and patient lady,” with the tedious thought

experiment of teaching a “most willing pupil” to visualize

the flowers through written language alone – “After you have

looked over my letter once or twice, an umbellate plant

to agree with his post-script. “The meanest kitchen-maid

will know more of this matter than we with all our learning.”

In describing the umbellate Queen Anne’s Lace in flower,

a maid would not have forgotten to mention that crimson

dot at the center calling the bracid wasp to his favorite

pollenatrix. This drop, it is said, the queen pricked from

her own finger on the spindle of her perfect lace. A drop

that slips from a kitchen-maid when the great philosopher

returns from the prairie of his letters to the greener pasture

of her idealized womanhood. A maid would not have forgotten

the mark by she knows which umbelliferous queen stops

your heart and which one sets it beating once more.

on too much lace. It is said the queens upset the sheep’s

digestion, but watch the hoofed beasts and see how they know

after a miscarriage to graze the medicine of those leaves.

and close in on themselves like a bird’s nest. The meanest

maid knows this is when you gather your clumps of seeds.

No one writes down what the kitchen-maids say, so no one

is anymore sure whether you drink them only after sex

two weeks between ovulation and menstruation. Some say

you must chew the seeds to release the tannins. Some say

drink them down in a glass of water. Some say it is a crime

to publish such information. Some say only that it is a liability.

Now in the laboratories of the minds of the great thinkers

they call it rumors and old wives tales. As if none of us

has ever needed an old wife. As if only fools would

allow themselves to turn into such wizened things.

There was Anne I who was known for making beautiful lace.

And there was Anne II who was known for her sixteen

of a government. There was Anne I who employed subterfuge

and intrigue to manipulate the King’s policies. And there was

even an account of discontent among the flourishing and well-fed

people. And yet what is said of her is only that she was Anne

My ire at the kingdom.

My ire at the kings.

My ire at the philosophers who think

they can just reinvent the world

inside the eye of their own minds.

What I want I want on terms as I dictate them.

My ire at my impossible wanting.

That I can be no flower and be no field, my ire.

That there will be more castrated queens,

an endlace necklace of almost enough, my ire.

My ire, if you wait enough years, the field will finally grow.

If you wait years enough you will be long dead, my ire. 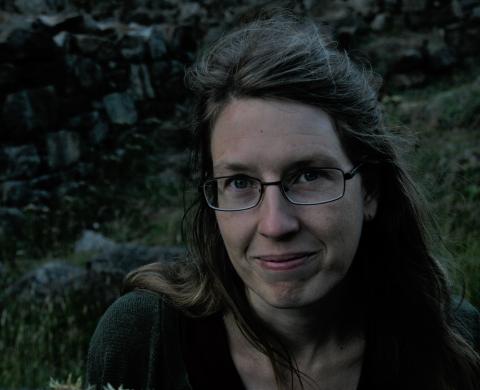 A special initiative of the Chancellor